Thin-film solar cells are a promising technology in the field of photovoltaics. Among the semiconductor materials, amorphous silicon, cadmium telluride, CIGS (copper indium gallium selenide/sulfide) and CZTS (copper zinc tin sulfide) are the most common. The substrates can be rigid or flexible (Figure 1), metallic or insulating. Typical methods for the deposition of the semiconductor on the substrates comprise physical vapor deposition (PVD), chemical vapor deposition (CVD), electro-chemical deposition (ECD), plasma-based and hybrid techniques. Such versatility allows for the tailoring of desired characteristics depending on the application. 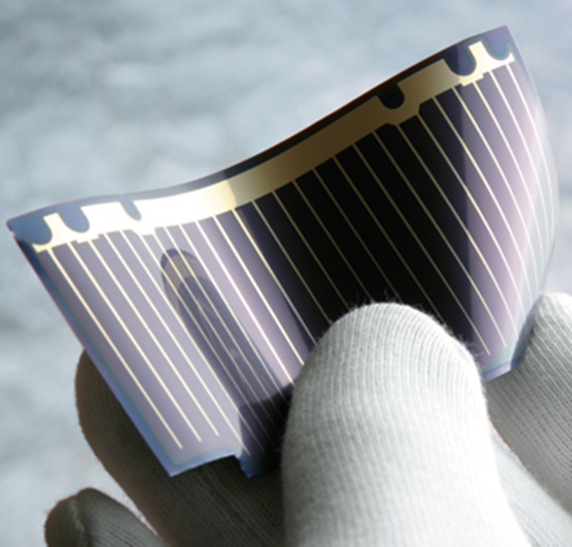 Hence, the control over the entire production sequence is of great importance. Especially a homogeneous composition and the purity of every component are crucial and must be checked strictly throughout the whole processing line.

The measurement of the composition and the layer thickness of thin-film solar cells can be performed very precisely with the Glow Discharge Analyzers GDA 650 HR and GDA 750 HR by Spectruma Analytik, regardless whether the layer thickness is few nanometers or several hundreds of micrometers. All elements of the periodic table including H, Li, Na, K, C, N, P, S and O can be detected. The detection limits range from 0.1 to 10 ppm. The relative depth resolution amounts to 5-10 % of the detected depth.

Figure 2. Quantitative depth profile of a CIGS layer on a glass substrate measured by GDOES

Figure 2 shows the depth profile of a CIGS sample on a glass substrate analyzed by the GDA 750 HR. The thickness of the zinc oxide layer amounts to 0.42 µm, the CIGS layer is 1.4 µm. The cadmium sulfide layer between the zinc oxide layer and the CIGS layer is clearly discernible. At the molybdenum layer there is a potassium accumulation. Moreover, traces of iron have been monitored.

Figure 3 shows the SEM picture of the same CIGS sample as in Figure 2. The results obtained by GDOES and by SEM are in very good agreement. When analyzing by SEM, the sample preparation includes grinding and polishing and can take up to one hour for each sample. Analyzing by GDOES requires almost no sample preparation and takes only several minutes. Samples can be directly analyzed as received from the production.

Results of depth profile analyses are presented in a graphic and in a tabular form. Moreover, the software WinGDOES enables users to perform any desired calculations in the so-called custom tables. Figure 4 shows an example of such a custom table.

Furthermore, WinGDOES can be programmed to identify certain desired conditions (e.g. GGI/CGI values or layer thickness) automatically. So measurements can be conducted quickly and effortlessly even by untrained operators.

In summary, Glow Discharge Analyzers by Spectruma Analytik are the perfect instruments for fast and reliable measurements of thin-film solar cells.

For further information on the Glow Discharge Analyzers please follow the link.